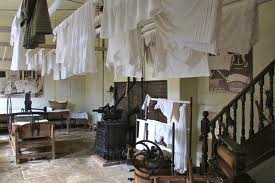 A close look at Victorian laundry practices will have you thanking your lucky stars you live in a mechanized age.  No wonder they didn't change clothes as often as 21st century people do!  I found out why when I was doing research for another novel:


- ink - vinegar over stain then then oxalic acid
- fruit  - butter/ammonia/washing soda
- glue - alcohol
- mud on wool - potato juice
- stained black cashmere - rinsed in mustard water made from 6 ounces of mustard flour in six       quarts of boiling water
- stained blue flannel - bran water
- grease on silk - chalk or magnesia and ether or egg yolk and water
- paint or varnish - cover with butter or sweet oil then rub with turpentine
-  candle grease - eau de cologne
If you think that's complicated, check out these instructions from Baroness Staffe, on cleaning lace:
And that's just ordinary lace.  The expensive Valenciennes lace had to be rolled up and sewn into a bag of fine, white linen, soaked for 12 hours in olive oil, boiled for quarter of an hour in white soapy water and rinsed in rice water!!
This is just a small sampling of the intricacies of the Victorian laundry.  It's no wonder that most people who could afford it sent their clothes out to be laundered.

Check out these stringent criteria that  were promoted in the Victorian era as guidelines for finding the perfect wife.  I found them in an article on Courtship and Marriage Etiquette from the London Journal (1871).  The author's name wasn't mentioned.  I wonder whether it was a male or female.  See what you think:

1.  A good wife shouldn't talk too much:

2.  Or too little:
3.  Or be a lazy layabout:
4.  Or have a slovenly mother:
5.  Or be untidy:
Not exactly "Cosmo" advice!
To be fair, the same writer warns women against marrying a gambler, a spendthrift, a drunkard, a compulsive borrower, an "airy fairy" schemer or a shabby, untidy layabout.

Below is an example of related Victorian humour from George Du Maurier's book English Society at Home. As you can see, political correctness wasn't a factor at the time! 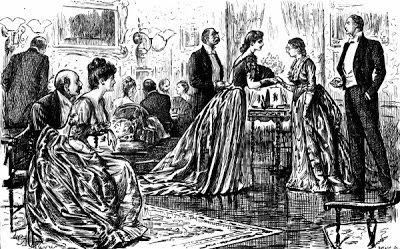 WHAT INDUCED HIM TO MARRY HER?

He.—"Look! Here comes young Brummell Washington, with his bride. I wonder what on earth induced him to marry her?"
She.—"Oh, probably somebody bet him he wouldn't!"

Victorian weddings definitely started the trend of the "Big Day" which is now a modern day obsession and multi-billion dollar industry.

Brides always had a trousseau tea when her lady friends and family got together for refreshments and the viewing of every piece of the prospective bride's trousseau.  A typical trousseau included lace-trimmed camisoles, silk and flannel undergarments; at least two French corsets with extravagant lacework, two crinolines, plus a beautifully hand-embroidered special-occasion petticoat. Numerous pairs of white and grey stockings, gloves in white kid, grey cotton, fine black leather and long satin evening gloves, bonnets and cloaks, neat travelling suits, as well as a variety of pretty day dresses and a spectacular evening dress in peach coloured lace and peau de soie.  A collection of hand-painted fans as well as china, crystal, silverware, table and bed linens.  No such thing as light packing!
The Victorian bride wore a dress of shimmering white satin, the long, flowing sleeves and stiff collar edged with delicate lace.  Below the collar, the neckline was filled with the same silvery lace beneath which the “something blue” sparkled, a rich sapphire pendant from her parents or matching sapphire earrings.  In the mid-19th century it had a crinoline skirt, after the 1870's a bustle.
Headdresses were made from real orange blossoms often imported from Morocco and fastened together with a gauzy tulle veil.  The bouquet was usually a posy of the creamy-white blossoms trimmed with loops of satin ribbon.
The bride went to church in a carriage, decorated with white ribbons and pulled by two horses driven by a liveried footman.  Crowds gathered in the street to see the bride and, as was the local custom in some areas, the bride threw coins from the carriage window onto the street for the little children to pick up.
The groom and groomsmen waited at the church in morning suits with dashing waistcoats (lavender was popular) and grey gloves.
The wedding reception was usually a breakfast set up at the bride's parents' home. A typical wedding breakfast was massive - punch in frosted tumblers, platters of stewed oysters, colorful galantines gleaming in their coat of aspic, mayonnaise of fowl piled into pyramids and decorated with anchovies and hard-boiled eggs, cold pheasant, fruit ices, crystal dishes filled with rich trifles, and trays of éclairs and petit fours.  At the center of it all was a tiered wedding cake iced with  flower and leaf decorations on a plate of silver leaves and white flowers.
After the speeches the happy couple held hands and cut the wedding cake. The servants transported it away to the kitchen where it would be packaged into little silver boxes and given to all the guests.
Victorian marriages were meant to last forever since getting a divorce was next to impossible - but that's a whole other blog entry! And one of the problems the main character in my novel Unnatural encounters.

I read a lot about "Women and Mind Doctors" in Victorian Europe while researching my novel, Unnatural.  I was alarmed to discover the extent to which the Victorian patriarchy, including many eminent mind doctors, used their power to manipulate and oppress the already subjugated women in their households.
On the side of reason the great John Stuart Mill argued that, " the supposed inferiority of women's intelligence was a result of the differences in their education and not something determined by nature," and that it was no wonder "high class" women were more susceptible to nervous complaints when they were brought up as "hothouse plants, physically inactive, yet unnaturally active where the emotions were concerned."

On the side of blind prejudice were several men whose misogynistic views made them very popular with the Victorian public.  Henry Maudsley (1835-1918) contended that "Education is an excessive mental drain on a young woman's mind" and at puberty women's nerve centres became increasingly unstable so that any extra mental effort and competitiveness - the kind of activity that young men thrived on - could be damaging to a young woman.  The results?  Irregular or failed menstruation, headache, fatigue, insomnia, epilepsy, complete nervous breakdown and failure of the reproductive system.  In other words, educated women won't be able to have babies!!


The eminent Dr Maudsley who incredibly has his name attached to the biggest psychiatric training hospital in the UK used his prejudice and sexual fears to influence generations of men.  He wrote essays in which he described these women whose reproductive systems had failed (due of course to intellectual over-exertion).  He portrays them as unsexed sterile women with sagging breasts and loss of pelvic power who "having ceased to be a woman are not yet men ....yet they invoke the dressmaker's aid in order to" hoodwink men.  Maudsley believed that if equal education for women came about society would become a "sexless dystopia" destroying the family unit and inevitably Victorian civilization.  So if middle-class women attempted to better themselves it could only result in madness and the decline of the species.

Elizabeth Garrett Anderson (1836-1917) struggled against such deep-seated prejudice to become the first female doctor in Britain.  She married, had three children, was politically active and contradicted Maudsley's claims.  She said it was the lack of mental and physical stimulation after school life that caused nervous problems in women and that "thousands of young women, strong and blooming at eighteen, became gradually languid and feeble under the depressing influence of dullness."

Brilliant women like Alice James, the sister of William and Henry James spent years going from one doomed treatment to another, enduring "rest cures" that drove her mad with inner struggle.  You just have to read the famous short story by Charlotte Perkins Gillman, The Yellow Wallpaper in which the heroine is driven to insanity by the menacing rest cures utilized by Dr. Silas Weir-Mitchell.  His treatment included rest, seclusion, isolation, constant feeding to gain at least 50 pounds, massage, enforced bed rest, darkness, minimum movement and "staged menacing" from the doctor who is credited with removing his trousers and threatening to get into bed with a patient if she didn't do what he asked.  Others advocated "the cold bath, the douche and cold applications to the regions of the uterus [which] have all been employed with advantage."

I've only scratched the surface of the scab that blights the history of the male-dominated psychiatric profession.  If you want to find out more read Mad, Bad and Sad an amazing book by Lisa Appignanesi.
It's sobering to finally discover the origins of prejudice especially as many of these arguments still linger today!
- March 02, 2013 No comments: