GRACE'S TABLE: A FEAST OF A BOOK

I'm happy to review another book sent to me by Legend Press. This week it's Grace's Table by Australian author, Sally Piper. 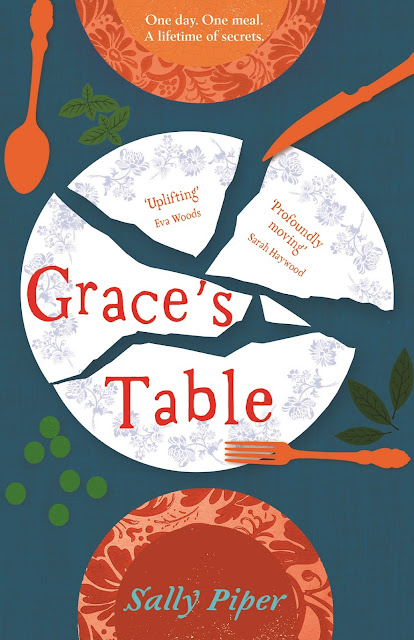 Set in Australia, this wonderfully insightful debut novel is set over the course of one day in the main character, Grace’s life. But it’s no ordinary day; it’s her 70thbirthday lunch. Over the course of the day, Grace works alongside her daughter, Susan, preparing the meal and slipping into memories about her past, mostly triggered by mundane tasks such as shelling peas or mixing gravy.

Soon a gentle story metamorphoses into a painful study of Grace’s own difficult childhood, a tragic teenage love affair, a loveless marriage and finally a family traumatized by grief, regret and resentment, resulting from a shocking event in their past that reverberates through the following decades. Soon it’s clear that Grace is not just cooking a birthday meal, she’s fighting to keep her family from falling apart and drifting away from her.

Piper achieves this in a subtle, skilful way using the medium of food. Grace remembers her own emotionally distant mother whose only way of showing her love and expressing her creativity was through her carefully prepared and wonderfully tasty meals. Grace remembers the rare intimacy of those moments when she watched her mother whip up meringues and sponge cakes from scratch, and attempts to do the same with her eldest daughter, Susan, now a tense and anxious mother.

As family members and friends arrive for the birthday celebration, the memories become more vivid and troubling, and the interactions with her own children more bitter and abrasive, until a final family showdown results in all the hurt being laid bare and all the grievances aired.

Piper masterfully creates Grace as an unconventional, humorous and free-spirited character. A strong-willed woman who is finally forced to face her unrealistic expectations of her children and her own shortcomings as a mother.

This incredible novel is not only a luscious and lyrical tribute to the power of food as a force to bring people together, it’s also an insightful reflection on the dynamic and powerful nature of family relationships. As Grace so aptly states:


Families were like sand dunes…. They shifted shape and position with even the gentlest of forces. Even a tiny puff – a shrug – could bring about change, move a handful of thoughts to a new understanding, a new authority. A gale, like today’s, and whole dunes – lives and futures – were relocated, reimagined.

Sally Piper is an award-winning Brisbane based writer.  She is a former nurse and nurse educator, specialising in neurosurgical critical care, and has worked in both Australia and the UK.Sally has had short fiction and non-fiction published in various online and print publications, including a prize-winning short story in the first One Book Many Brisbanes anthology, The Sydney Morning Herald, The Saturday Paper, Weekend Australian and WQ plus other literary magazines and journals in the UK. She has been interviewed for radio, been a guest panellist at literary festivals and delivered many author talks and readings.Sally holds a Master of Arts (Research) in Creative Writing from Queensland University of Technology. During her post-graduate studies she also tutored on the QUT Creative Writing program. She currently presents workshops and seminars for the Queensland Writers' Centre and mentors on their 'Writer's Surgery' program.
If you want to check out more reviews of this book, take a look at these other great book blogs: 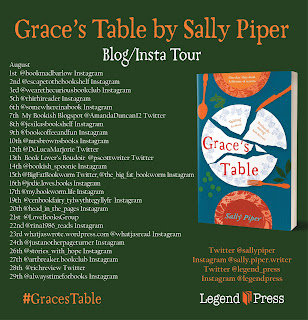 A SONG OF COURAGE, INJUSTICE AND TRAGEDY

A huge thanks to Legend Press who sent me a copy of Carolyn O' Brien's touching novel, The Song of Peterloo, to review. I'm delighted to be a part of the blog tour. 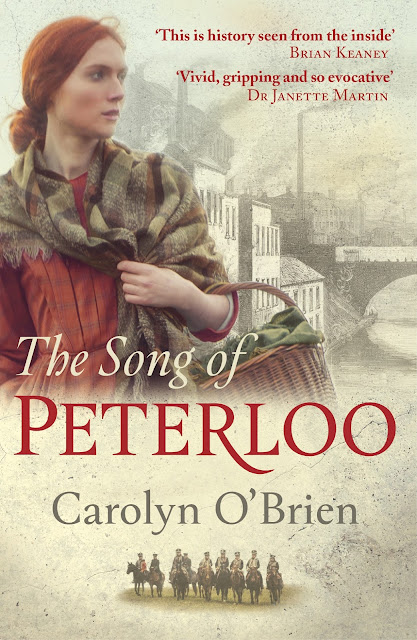 This compelling historical novel centres around The Peterloo Massacre, a real life tragedy of 1819, when close to 100,000 peaceable protesters gathered on St. Peter’s Field, Manchester to campaign for parliamentary reform. Nervous magistrates watched from a nearby window, then decided to read the ”Riot Act,” calling on up to 600 armed soldiers from the Manchester Yeomanry to break up the meeting, with the intention of arresting the main speaker, Henry Hunt. The soldiers, brandishing sharpened sabers, rode in among the crowd. Hundreds were injured and dozens killed, including women and children.

Carolyn O’Brien wisely uses the voice of Nancy Kay, a young mill worker, to tell most of the story, giving a distant historical event a much more human feel. Nancy lives with her young son, Walter and ailing mother, Ann, in a permanent state of grinding poverty and hunger, brought about by low wages and crippling prices. The author subtly portrays their dire situation without being heavy handed or patronizing, which often makes for heartbreaking reading.

Nancy’s voice alternates with friends, relatives, enemies and the two widely different men who share her life that momentous summer. Nancy is an energetic, likeable, well-drawn character with a thirst for knowledge and a strong sense of justice. When she is given the chance to learn to read by her sympathetic employer, Samson, she becomes even more aware of the rampant social injustice that keeps her and her neighbours and co-workers, hungry and impoverished for life. Soon she is inspired to join the reformers in a great movement that calls for social change. Little does she know that the great protest being planned, will turn out to be a terrible human tragedy and not the triumph they hoped for.
At first, I found the author’s use of alternating voices a little jarring, as it interrupted the story’s narrative flow. I appreciated that this was intended to provide an interesting mosaic of differing points of view, but I found myself wanting to get back to Nancy’s voice and her absorbing story. Gradually, however, the other voices became stronger, particularly Adelaide, the snobbish social upstart and Samson, her empathetic nephew whose terrible experiences in battle showed him that all human beings should be treated with dignity regardless of social class.
Overall, I found myself rooting for the main character and her fight for social justice at a time when the poor were treated as little better than slaves, and children were forced to work in dangerous industrial situations with no concern for their safety. It’s refreshing to hear the voice of the marginalized and silenced telling the story of such an iconic historical event, especially at the commemoration of its anniversary.

The blog tour itinerary is listed below. Check out some of these amazing book review sites! 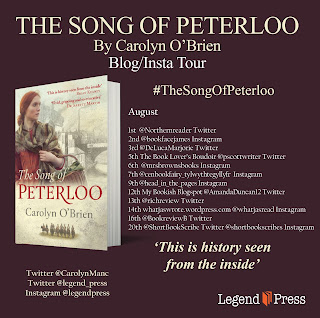