A LOOK AT LOCAL TALENT

This year's Thin Air Writers' Festival showed yet again that there are so many talented writers in my home town of Winnipeg, Manitoba, as well as a multitude of avid readers who filled the various venues during festival week. So I thought I'd use this post to feature two nationally known local writers whose books I've recently read and enjoyed. I hope you'll be interested to read their books too or feature them as selections for your book clubs.

AFTER LIGHT by CATHERINE HUNTER

I've long admired the poetry of Catherine Hunter whose anthologies, Lunar Wake and Lunar Heat, are among my all-time favourites. Now, after writing a successful string of mystery/suspense novels, Hunter, a University of Winnipeg professor, has turned her considerable talents to the creation of a lovely, compelling family saga. 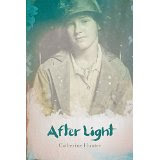 In this sweeping family saga set in Ireland, New York and Winnipeg and spanning four generations of the Garrison family, Catherine Hunter has created a gorgeously written, compelling story of the secrets, conflicts and tragedies that drive a family apart, but also the shared experiences, loyalty and deep love that binds them together.At its heart, this is a story of two very different sisters, Siobhan (Von) and Rosin (Rosheen), whose grandmother, the tempestuous and independent Deirdre, fled from Ireland to New York in the 1920's to escape a grim, impoverished life.Roused from seclusion by the sudden death of her artist sister, Von travels to New York to discover Rosheen has left her final art project unfinished weeks before its scheduled exhibition date. Von is forced to undertake her sister's last wish - that she complete the project. So begins a journey from America to Europe in which Von learns more about her grandmother, her father Frank, her sister and herself as well as Rosheen's estranged son Kyle. The journey brings painful buried secrets and resentments out into the open until Von must face them head on.Catherine Hunter writes with an unflinching eye for detail, particularly in the battle scenes from WWII, which tell the true story of the horror Frank and all the other incredibly young soldiers faced. This is also a story about the redemptive power of art and Hunter tells it with the lyrical beauty that only a poet can. Scenes of rural Ireland and the Manitoba prairie winter are only a few of the gorgeous images that will stay with the reader long after the book is finished. The author is also a skilled writer of mysteries and this is clear in her ability to maintain the right amount of suspense to keep the reader turning the page as each layer of family resentment, denial and bitterness is peeled away until the painful secret at the core of the family is finally laid bare. A wonderful, sweeping saga. A great read!

THE OPENING SKY by Joan Thomas


Here's the Goodreads synopsis:
Liz, Aiden, and Sylvie are an urban, urbane, progressive family: Aiden's a therapist who refuses to own a car; Liz is an ambitious professional, a savvy traveler with a flair for decorating; Sylvie is a smart and political 19 year-old, fiercely independent, sensitive to hypocrisy, and crazy in love with her childhood playmate, Noah, a bright young scientist. Things seem to be going according to plan. Then the present and the past collide in a crisis that shatters the complacency of all three. Liz and Sylvie are forced to confront a tragedy from years before, when four children went missing at an artists' retreat. In the long shadow of that event, the family is drawn to a dangerous precipice. 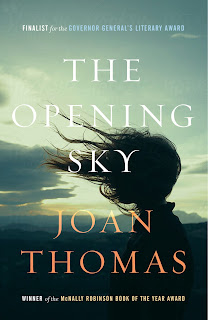 Joan Thomas has such a keen eye for human failings - envy, vanity, pride and our tendency to harbour bitterness and perceived slights until they fester into unmanageable proportions.  Using three separate viewpoints (Liz, Sylvie and Aiden's), Thomas weaves a story that draws the reader into the darkness, pain, strife and good intentions at the heart of this dysfunctional family. Though the characters are rather unlikeable - Aiden, the father: well-meaning but weak, Liz, the mother: brittle, emotionally inhibited and materially obsessed, Sylvie, the daughter: self-centred, careless, eco-obsessed - Thomas relays the story with such sharp underlying wit the reader is compelled to turn the page just to see how these three people can muddle and blunder their way through the string of family conflicts and a potentially tragic crisis that could ultimately destroy them.
This is definitely a story about people trying to do the right thing, but it's also about people struggling to love and be loved despite the sharp differences between them. As a reflection on the darker side of modern family life and the often misguided ways in which we all try to do the right thing for our children, readers will find a lot to identify with in this beautiful, lyrically written novel. 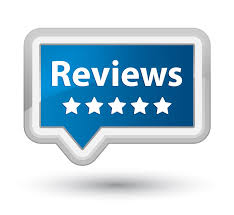 ABOUT REVIEWS
It seems that Amazon is changing the way it adds reviews to an author's page. If you read a novel on an e-reader or Kindle, when you're finished the book a message will pop up asking you to give a star ranking. If you do, this will not appear on the author's product page as a review. To leave a review, you actually need to go onto Amazon and create one. All authors know that reviews (preferably positive ones) are precious. They're a type of currency - particularly on Amazon, since they're used in an algorithm to determine how much  your book will be pushed and promoted by Amazon. So please, if you've read and enjoyed any of my books, or books by authors I've featured, write a review. It doesn't have to be long or detailed. Just say what you enjoyed (or didn't if that's the case).
And that's my sermon for today!!