THE GIFT OF READING

As we head into the holidays and possibly into a mad frenzy of shopping, cooking, eating and entertaining, it's a good idea to make some quiet time for reflection and most importantly of all—for reading.
This year I've spent a whole lot of my time working on the revisions of my novel THE SAVAGE INSTINCT, which is to be republished in a second, very different edition 2020 by Inkshares, but I've also enjoyed reviewing books for NetGalley and Legend Press, a UK publisher.
I've shared below some of my great reads of the year. Hope you can find the time to read one or buy as a gift for friends or family.
Happy holidays!

Local Winnipeg writer, Joan Thomas was the most deserving winner of this year's Governor General's Award for fiction with her novel FIVE WIVES, a fictionalized account of the lives of the real women left behind when their husbands were killed in a misguided attempt to contact the Waorani, a reclusive tribe from the Ecuadorean rain forest. "Operation Auca" as it was called, was undertaken in 1956 by a group of evangelical Christian missionaries, eager to share their faith and 'convert' the 'savages' to the word of God. Their wives and children were left to fend for themselves.
The book moves back and forth in time, from a present-day storyline of one of the grand-daughters who is given the opportunity to star in a movie version of the operation, then back to the past where each woman's story is explored. In this way, Thomas pieces together the events from different viewpoints, which makes for fascinating reading as some of the women are more zealously committed to the operation than others who fear the plan is ill-thought out but—since it's the 1950's—acquiesce to their husband's 'better' judgement.
While the story doesn't dwell on the actual details of the tragedy, Thomas deftly builds in a sense of soaring, almost boyish hope in the husbands as they set out on a great adventure while their wives wrestle with niggling fears of impending doom as they are left to deal with the uncomfortable realities of surviving in a primitive tropical setting with small children.
Throughout the entire novel Thomas's sly sense of humour is ever-present as she subtly reveals the short-sighted arrogance of the evangelical philosophy and its attitude towards third world peoples as well as the strength and foresight of the women who survive the tragedy and ultimately prosper in roles that their husbands could not. Beautifully written, this is a truly compelling read. 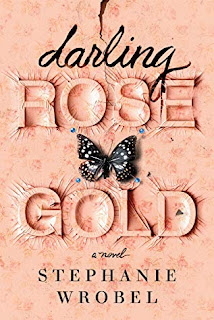 Darling Rose Gold by Stephanie Wrobel is a compelling page turner, surprising since the two main characters are highly unlikeable women. Patty, Rose Gold's controlling mother is a disturbed, damaged woman whose denial of her crimes makes her all the more threatening and dangerous, Rose Gold, the daughter, is a sad, pathetic young woman whose childhood was destroyed by her mother and whose adult years continue to be affected by the trauma.
The story begins with Patty being released from jail after serving five years for poisoning, starving and reducing her healthy daughter to invalid status until concerned friends help Rose to break free and report her mother's crimes. Strangely, however, Rose meets her mother from prison and invites her to stay. Keen to re-establish her dominance, Patty is surprised and accepts, hoping to slot right back into Rose Gold's life. But is the daughter offering an olive branch and putting the past behind her, or is something more sinister at hand as these two damaged women jockey for the upper hand using an arsenal of weapons—lies, secrets and devious cunning?
Told from alternating points of view, Wrobel ratchets up the tension with some surprising twists and turns until you simply have to find out who wins in the surprising ending. A terrific read.
Thanks to Net Galley for providing a preview copy in return for an honest review. 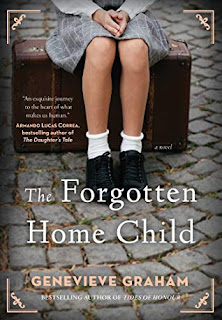 This heartwarming yet heart wrenching novel deals with a little-known chapter in Canadian history—the shocking treatment received by a large number of British Home Children at the hands of those Canadians who paid UK authorities to employ these unwanted children, using them as indentured servants, slaves and in many cases, treating them worse than the animals they tended.
Genevieve Graham interviewed survivors of these Home Children and unearthed a painful chapter of suffering that lasted from the late 19th century until 1948. Sent from large orphanages like Dr. Barnardo's and other smaller institutions, these children were promised a fresh start in an exciting new country. What they encountered was much worse than they could ever imagine. Graham tells the story of Winnie, friend to siblings, Mary, Jack, Edward and Cecil. Abandoned by their parents, they scraped a living on the streets of London until they were caught and put into an orphanage. Reunited on the ship headed to Canada, they vow never to be separated, only to be torn apart on arrival. The brothers stay together, but Mary and Winnie go to separate farm families.
Winnie is treated cruelly by her employers, sleeping in the barn with the sheep and slaving night and day to keep the farm going, though her mistress softens her approach much later and takes an interest in her future. Mary, however, doesn't fare as well and it is her tragic story that shapes the remainder of the novel and impacts Winnie's and her brother Jack's lives in an irreversible way.
The story is written with warmth and empathy but doesn't hold back on the shocking and terrible details of the brutal treatment received by some of these children. Graham does, however, provide a balance by recognizing that many children were adopted by loving families and others found opportunities in Canada that they wouldn't have received in the UK and therefore their lives did improve, though they carried a deep burden of shame that they hid from their families. Only recently online support groups have sprung up so that descendants of the Home Children can share their troubling legacy and find some closure to this terrible chapter of Canadian history.
- December 23, 2019 No comments: 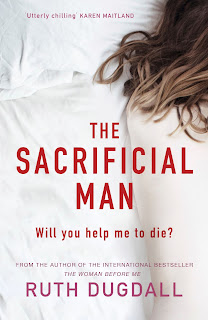 Ruth Dugdall’s new novel, The Sacrificial Man, the second instalment in her Cate Austin series is definitely not a book for the more squeamish reader. Dark in tone and containing grotesque and disturbing details, it tackles the very sensitive question of whether assisting a person to commit suicide is a crime or an act of love. This particular case, however, deals with a very different situation where the main character, Alice Mariani, a brilliant literature professor, obsessed with the Romantic poets, believes it’s an act of ultimate passion.
Cate Austin, probation officer, is called in to question Alice in order to recommend a suitable sentence, and discover why she agreed to help Dave, a young man suffering no apparent fatal illness, to die. As she tries to chip at Alice's icy exterior, she begins to dig deeper into the past of this enigmatic, beautiful though rather unlikeable woman and discovers how a painful, early childhood has shaped her into a lonely, unreachable narcissist haunted by the traumatic loss of her mother.
Told from multiple points of view, I found Alice’s voice the most compelling, though I enjoyed the more pragmatic character of Cate and would like to have heard a lot more from her. The story is fast moving, the plot compelling and the many twists and turns result in a powerful and shocking ending.
Thanks to Legend Press for sending me a copy in return for an honest review. 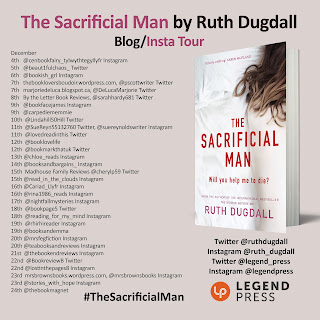