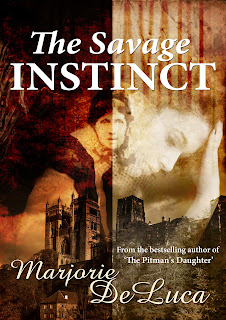 It seems the folks at ITV in the UK think the story of Mary Ann Cotton is as interesting as I do. They're starting to film a new 2-part period drama entitled DARK ANGEL, which will cover the story of Mary Ann Cotton and her crimes beginning at the period when she returned to the North East from Cornwall after losing the first of many children to disease or possibly at her own hand. Cotton is to be played by Joanne Froggatt of Downton Abbey fame, so this is a pretty high profile series. It's been filming in North Yorkshire and has just moved up to County Durham. I'll look forward to seeing the finished series.
After doing all the research and combing through numerous newspaper articles from the arrest and trial I feel I know this case really well.

When I wrote THE SAVAGE INSTINCT, I was more interested in the impact of the case on Victorian society than to tell Cotton's actual story. That's been done before in various ways. But through the character of Clara, I did reveal the disturbing details of the murders as the general public would have heard them in the newspapers. And the newspapers did sensationalize the case, leading some people to wonder if she actually got a fair trial and if everything they read was true!

I did come to some understanding of this woman and her crimes and I hope I reflected that in the book. Just as I hope the producers of this TV series will portray her using the facts at hand. And there are plenty of them!
I made a change to the cover and used the original design created by Jeanine Henning. I hope you like it! Oh - and if you've read the book and enjoyed it, please leave a review on Amazon or Goodreads!
- August 27, 2015 No comments: