This was my April! Two weeks in Spain and Portugal travelling across gorgeous, sunny Andalusia, followed by the pristine beaches of the Algarve for the last few glorious days. Then two weeks in England mostly staying in the north-west and north-east and finishing it all with a family reunion, a moving ceremony to commemorate the coal miners of Hetton, and the chance to be a real life Pitman's Daughter along with many other relatives and friends who are also pitmen's daughters!
Here's a little journey through some of the places we visited. 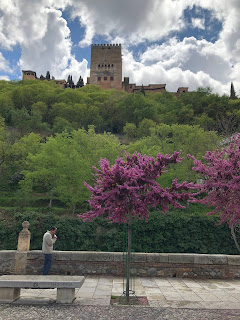 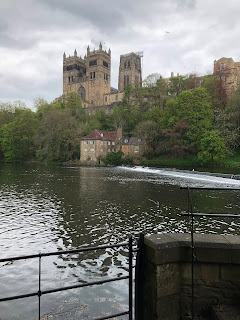 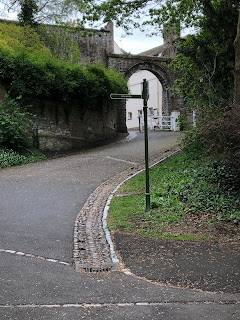 Now to Durham City, my birthplace and home of the most beautiful cathedral in the world! The sight of the cathedral nestled among the trees, above the River Wear, has been called one of the most stunning and mystical views in the world. The cathedral has been used as a backdrop for some of the Harry Potter movies and lately for an Avengers Infinity Wars movie. 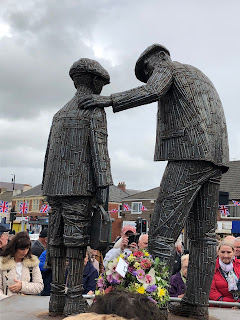 This beautiful statue of an older miner comforting a new boy on his first day in the mine, is called "Men Don't Cry" and was created by sculptor, Ray Lonsdale as a tribute to Hetton's mining heritage. I was proud to stand with all the other pitmen's daughters (and sons!) to see the statue unveiled and to read the nameplates that held the names of all the Hetton-le-Hole men who worked the mines. My father, grandfather and uncle were all named. You can watch the video by my brother, Ken Horn, on Facebook.Click here to view. Hope you enjoy!

By the way, for all you summer readers out there, here are a few great beach reads for you:

The fourth of Robert Galbraith's (aka J.K Rawlings) Cormoran Strike novels does not disappoint fans of this series. Though the plot is a little more complex and the action not as gory as the others, there's plenty going on regarding Robin's relationship with her new husband and her continuing chemistry with her eccentric boss!

This incredible novel about a woman who leaves her husband and her farm to dress in men's clothes and become a soldier in the Civil War, is so compelling I could barely put it down. Told in a unique, honest and unsentimental voice, it covers a little known aspect of the Civil war and pays tribute to the many women who made a contribution to the campaign.

A WORLD ELSEWHERE by Wayne Johnston

Another amazing novel by Johnston, this one tells the story of young Landish Druken, a Newfoundlander who attends Princeton and befriends George Vanderluyden, the son of a rich and powerful American family . Years later after Landish's father cuts him off without a penny, Landish adopts an orphan child and turns to his rich friend for help. Vanderluyden, now the new heir to the family fortune, invites him to his massive estate in North Carolina. Landish discovers his friend is at the head of his own strange and twisted empire and is unwittingly drawn into a family mystery that centres around a murdered child. Compelling reading!