An Afternoon with Margaret Atwood 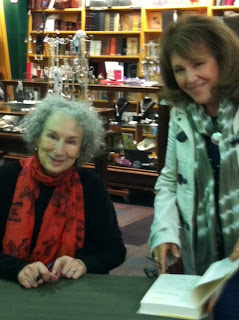 I can't think of a better way to spend a sunny fall afternoon than revelling in the intelligence and wry wit of one of the greatest literary icons of our time, the great Margaret Atwood, who appeared at McNally Robinson Bookstore yesterday.
This iconic author, recipient of the Booker Prize, the Giller prize, the Arthur C Clarke award and numerous others has been a major influence on my writing career. Books like The Edible Woman, Cat's Eye, The Robber Bride, The Blind Assassin, the chilling Alias Grace, the groundbreaking Handmaiden's Tale, the brilliant Oryx and Crake helped me to see that a writer shouldn't pigeonhole themselves and that science fiction is probably the most exciting and important genre around today.
A huge crowd turned out to see her and I even overheard a young twentyish woman say, "A bunch of us skipped out of work to see her. She's like the Beyonce of literature!" 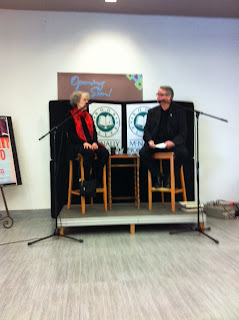 Terry McLeod of CBC Radio interviewed her mainly about Maddaddam, the final book in her brilliant sci-fi trilogy. She talked about her love of biology, environmentalism, her fascination with technology and the real science behind her dystopian trilogy. You can access it now on her Flipboard site. When asked what she thought about others comparing her to George Orwell she says she does it all the time and when McLeod made reference to the shocking "language/profanity" in her book she replied that he was only shocked because she wrote it! She confessed to using the Urban Dictionary just to make sure she had the right modern touch.
The afternoon concluded with a book signing and the longest lineup seen in years at the bookstore. I was thrilled to get my book signed and chat for a few short moments with this incredible author.
Ms Atwood was here to see the debut performance of the Royal Winnipeg Ballet Company's production of The Handmaiden's Tale. You can find her comments about the adaptation right here. 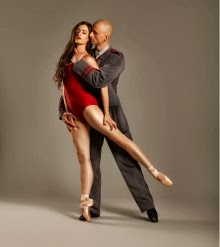