THE ANGEL AT THE HEARTH 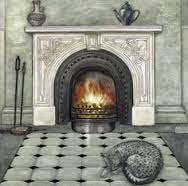 While doing research for my last two books (The Savage Instinct and A Proper Lady) I kept coming across a term that was used to define the role of women during the Victorian era. The term Angel at the Hearth or Angel in the House defined the ideal image and essence of womanhood. It was widely portrayed in the art and literature of the time and was used as a standard to define the perfect woman, mother and wife.
This idea actually gave rise to a whole genre of painting known as domestic pictures in which the ideal wife was portrayed as an earthly though angelic Madonna, soothing, comforting and submitting to her husband. Selflessly encouraging, watching over and nurturing her children while presiding over a well ordered, highly moral household.
A poet named Coventry Patmore actually coined the term in his narrative poem The Angel in the House, first published in 1854 and dedicated his first wife, Emily, whom he considered the ideal woman.
Though the poem wasn't very well received at first, the ideas soon took off some years later with popular artists and writers. Julia Margaret Cameron, the celebrated Victorian photographer offered her own interpretation of The Angel in the House. In this portrait of Emily Peacock, Cameron frames her subject in soft, white fur and uses muted lighting to give the appearance of gentle beauty. 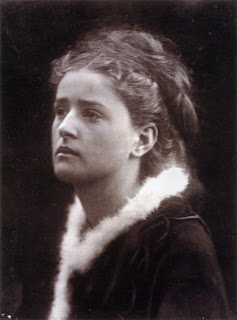 Painters vied to portray the ideal Victorian household. The picture below entitled Home Sweet Home by W.D Sadler is typical of paintings of this era. 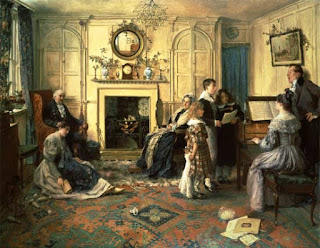 While this might seem like a perfect way of life for some, it could be stifling for a woman with aspirations or interests outside the home. Middle or upper-class women who were unmarried were regarded as "redundant" and unimportant with no actual status or role, and when they sought to fulfil themselves by working outside the home they were seen as rebellious and unusual. In popular media of the time they were often portrayed as objects of ridicule. Check out this late 19th century cartoon from Punch in which the elderly and unattractive (of course!) spinster tells her friend she's given up campaigning for women's rights, to dedicate herself to finding eligible widowers or women's lefts. 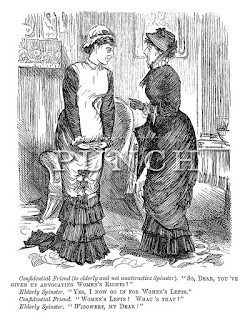 At the other end of the spectrum, lower-class working women like seamstresses, governesses and maids were seen as objects of pity and portrayed by socially conscious artists such as Richard Redgrave whose painting, The Poor Seamstress, captures the image of the poor working class woman, slaving from morning till night, sacrificing her life in a dark attic to feed her children. 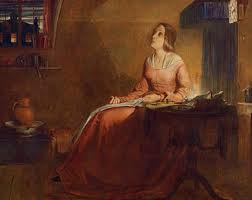 And those women who dared to step away from the rigid bounds of respectability became fallen women, who would suffer dire consequences as portrayed in Redgrave's, The Outcast, in which a young woman and her illegitimate child are forced from the household into the dark, snowy night by the stern, respectable patriarch of the family. Earnest entreaties from a distraught sister go unheard, while Mother comforts her sobbing son. 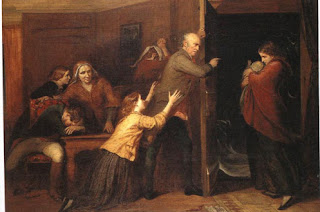 Perhaps it is Edmund Leighton's painting, Till Death Do Us Part, that truly portrays the idea that many Victorian women had little choice in determining the course of their lives. In this picture, the dejected young bride casts her eyes downwards in sorrow as she walks down the aisle with her rich elderly suitor, while her dashing young lover looks on, knowing she's lost to him forever. 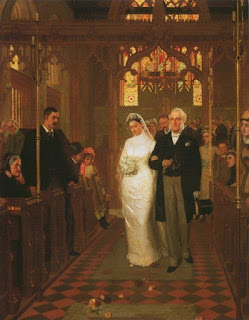 The only self-determined choice for a fallen woman was depicted in George Frederick Watts' painting, Found Drowned, based on Thomas Hood's poem, The Bridge of Sighs. Here a poor young woman atones for her sins by paying the ultimate price. 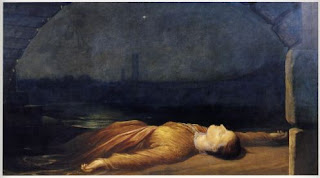 These are just a few of the paintings I came across in my research, but they're a fascinating way of understanding the mindset of that era and the way it has influenced us and continues to influence us to this day!
Also, the fact that these pictures were painted a little over a hundred years ago is a sign of how far we've come in terms of women's rights in many areas of the world, but should also serve as a reminder that a large majority of women still suffer terrible restrictions to their rights and freedoms in many other parts of the world.

BOOK NEWS!
For all Winnipeg readers! THE SAVAGE INSTINCT and LILAH will be available at McNally Robinson Booksellers starting this weekend!