SOME CALL THEM FREAKS... 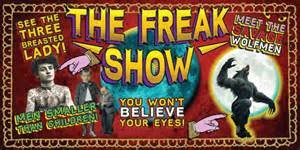 The title of my blog today is actually the title of an unusual HBO documentary that I watched as part of my research for A PROPER LADY. It's about about the history of circus freak shows and the very unique people who chose, or in some cases were forced, to exhibit themselves in public to satisfy the curiosity of the rest of us so-called "normal" people.
I soon discovered that when you look beneath the often shocking exterior and learned about the real person, that these were people of extraordinary courage and often amazing talents. There are conflicting opinions in the literature as to whether they were cruelly exploited or whether this was really the only way available for them to make a living and retain some measure of dignity. The jury's still out on that one. I've highlighted a few of them here to recognize their amazing resilience in the face of insensitivity and sometimes cruelty and indignity . 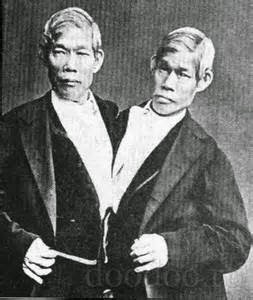 CHANG and ENG
Though not the first set of conjoined twins in recorded history, Chang and Eng were born in Siam in 1811 and are responsible for the origin of the term, Siamese Twins. Joined at the sternum by a piece of cartilage, their livers were also conjoined but functioned independently. Their mother taught them to stretch the tissue so they wouldn't always have to stand face to face. They were "discovered" by a British merchant who paid their family for permission to exhibit them. Initially the boys were excited to travel and did a successful world tour, but when they discovered their "owner" was pocketing most of the profits, they terminated the agreement and took up with the famous P.T Barnum. Eventually they retired with enough money to buy a farm in North Carolina. They met and married two sisters. At first there was talk of an operation to separate them but the sisters protested and they lived many years using a "bed for four" until the sisters began squabbling and two households were set up which the brothers took turns visiting. They produced 21 children between them and lived an independent life. In 1870 Chang began to fail after suffering a stroke and eventually died in his sleep. Though still healthy, Eng woke up, learned what had happened and declared he would go too. He died within three hours! 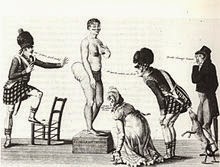 SARAH BAARTMAN
Born in 1789 in the Gamtoos Valley of South Africa, she was sold in her 20's to an enterprising Scottish doctor named Alexander Dunlop who took her to Britain and exhibited her as "The Hottentot Venus", an exotic "creature" with highly unusual body features. This caused quite a stir since abolition of slavery was so recent. Many organizations took up her cause, claiming she was being enslaved and exhibited unjustly. After a lengthy trial in which she herself testified, the case was thrown out since she'd claimed she was doing this of her own accord, though some feel she was pressured to say that. After Dunlop's death she moved to Paris and was exhibited there for four more years, but her popularity waned and she spent the rest of her years in poverty. After she died, parts of her body including her skeleton, skull and genitalia were exhibited at "The Museum of Man" in Paris until the late 1970's. In 1990 President Nelson Mandela requested that her remains be returned to South Africa. Thankfully she was finally laid to rest in 2002 on a hilltop near her home town. She left a powerful legacy and became a South African icon, a symbol of the Western exploitation and racism. 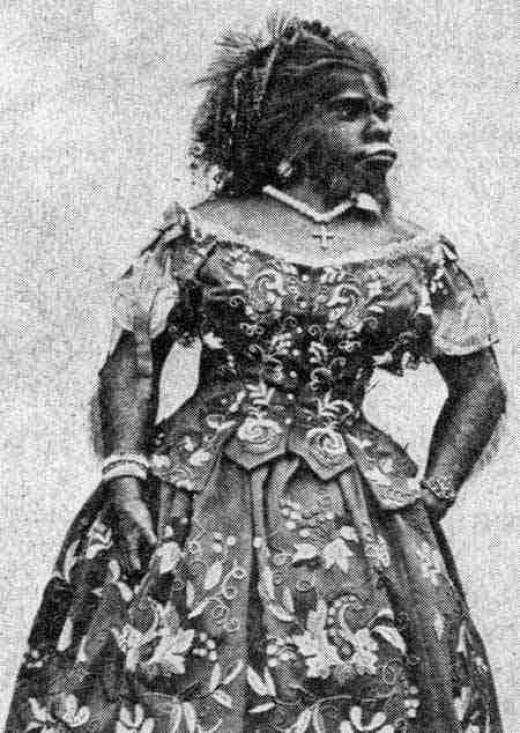 JULIA PASTRANA
One of the saddest stories has to be this unique woman's. Born in Western Mexico, Julia suffered with hypertrichosis which resulted in her body and face covered in hair, a jutting jaw and swollen gums. She arrived in New York in 1854 and was exhibited cruelly as Bear Woman, The Ugliest Woman in the World or even The Missing Link. Incredibly however, she began to charm audiences with her beautiful singing voice, small, dignified frame and great poise. She became quite a celebrity and was invited to galas and balls where she conversed with great wit and intelligence with many dignitaries. Sadly her latest manager, Mr. Theodore Lent, realized her potential and in an effort to prevent her leaving him, married her and proceeded to treat her with great cruelty, refusing to be seen outdoors with her and becoming increasingly violent. She became pregnant, gave birth to a boy who was also covered in hair. The child died after three hours. Heartbroken, Julia weakened and died within a few days. Refusing to give up his source of income, Lent had her body and the body of their son, mummified, put into a glass case and toured the exhibit until he found and married another woman like Julia whom he exhibited together with his previous wife. He was eventually committed to a mental asylum. The mummified remains turned up in Oslo and were exhibited until the 1970's. many petitions were created to repatriate the bodies to Mexico, which they eventually were in 2013 at a large Catholic mass attended by thousands. The mayor of her home town said "Julia has been reborn among us, let us never see another woman be turned into an object of commerce." Wise words! I hope we'll remember them!

GREAT NEWS!!!
It's been a heady week with THE FOREVER ONES reaching #1 in two Amazon Bestseller lists and at time of writing #72 in the entire Kindle store!!
You can also pre-order SEARCHING FOR ROBERT P, EPISODE 2 right here
BUSTED OUT, THE PARASITES and THE PITMAN'S DAUGHTER will all be on Kindle Countdown. Check out the links to see when.
- September 25, 2014