I just finished working on a very harrowing novel that dealt with some tough social issues so, while I let that book sit for a few weeks before I make final revisions, I like to move away from harsh reality and step back in time to the magical world of imagination and myth.
I'm working on a Middle Grade/Young Adult novel set within the rich folklore and mythology of North Eastern England, my birthplace. I was inspired by a quote from a book written in the early 19th century by Walter White who travelled through Northumbria and the borders. He visited the remote Farne Islands and quotes the words of a 7th century contemporary of St. Cuthbert's:

In the northernmost reaches of England, near the wild Northumbrian coastal islands we encountered the Farne Devils. Clad in cowls, and riding upon goats, black in complexion, short in stature,  their countenances most hideous, their heads long - the appearance  of the whole group horrible. Like soldiers they brandished in their  hands lances, which they darted after in the fashion of war. First the sight of the cross was sufficient to repel their attacks, but the only protection in the end was the circumvaliation of straws,  signed with the cross, and fixed in the sands, around which the  devils galloped for a while, and then retired, leaving us  to enjoy victory and repose.
This new book is inspired by the incredible castles at Bamburgh and Lindisfarne in the old Kingdom of Northumbria. Since I spent my childhood sixty miles south in Durham City, I visited these places as a child and later as an an adult. I remember being struck by the mysterious castles perched on rocky crags above remote and untouched beaches. They sparked something in my imagination  I knew sooner or later I'd have to explore and use in a story. Hence The Flamebearer was born.
So many of the books I enjoyed as a child were set in haunting, strange, mysterious - even bizarre places. Here are a few of my favourites. Perhaps they'll remind you of your favourite childhood stories or maybe you'll be tempted to look them up again and read them to your children or grandchildren.

ALICE IN WONDERLAND and THROUGH THE LOOKING GLASS 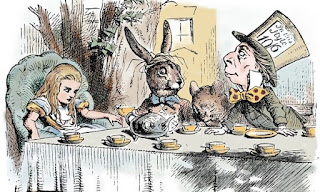 Who can forget the bizarre dream world of Lewis Carroll's famous character Alice. Like walking into a strange dream or hallucination where everything is just slightly off kilter and a person can grow bigger or smaller just by nibbling a piece of cake or drinking a mysterious drink. This is a world of transformations where a screaming baby turns into a squealing piglet, where chess pieces take human form, where courtiers become playing cards, and a pet kitten becomes a queen. I remember being so struck by this book I made paper cutouts of all the characters and re-enacted the scenes against hand-drawn backdrops! Slightly obsessive!

This haunting story by Finnish writer Tove Jansson is set in a dark, lonely winter world. Young Moomintroll suddenly awakes to find himself alone, while his family family rest in the deep slumber of their annual hibernation. Unable to get back to sleep he wanders through his house which seems strange and unfamiliar with its covered furniture and unseen creatures under the sink. Outside he discovers a world he's never encountered where the sun barely rises and the ground is covered with cold, white powder. At first he's scared and angry until he meets Too Ticky and Little My, a strange little creature who sleds down snow hills on Moominmamma's silver tray and skates with their kitchen knives as blades. In this book winter is personified as The Lady of the Cold, who freezes squirrels with one look from her eyes. A magical book! 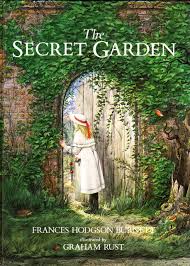 Set on the bleak Yorkshire Moors and the dark, forbidding Misselthwaite Manor, this classic children's story features Mary, a grieving orphan sent to live with her uncle since her parents died of cholera. Mary is a sickly, sour child used to being waited on by servants in the lush, tropical surroundings of a large colonial home in India, so the cold, bleak landscape of Yorkshire comes as a shock to her. Soon Mary begins to explore her surroundings and discovers the beauty of nature with the help of friendly housemaid, Martha, groundsman, Ben Weatherstaff and Martha's outdoorsy brother, 12 year old Dickon The two become great friends and work together on a hidden garden that belonged to her deceased aunt, Mrs. Craven. They also discover her young cousin, Colin, confined to a wheelchair and deprived of fresh air for years. Together the two children secretly nurse him back to health while cultivating the beautiful secret garden. This is a touching novel of love and compassion.

The most recent of my recommended books for children but enjoyed by adults. This story brilliantly intertwines vintage photographs with a thrilling story to create a creepy and strange atmosphere. After a horrifying family tragedy, sixteen year old Jacob journeys to a remote island off the coast of Wales where he discovers the crumbling ruins of Miss Peregrine's Home for Peculiar Children. As he explores the abandoned rooms he discovers the strange children, pictured on the set of vintage photographs given to him by his deceased grandfather, may still be alive and do actually possess strange and dangerous powers. The story becomes a fast-paced mystery as Jacob races to help the children who are threatened by a ruthless enemy.

There isn't enough room here for the other great children's books I could have mentioned. Maybe I'll do that in a later post. Meanwhile - back to the drawing board and time to step back into the world of the dark Northumbrian coast!!