A ROOM OF ONE'S OWN AND A DARK ANGEL 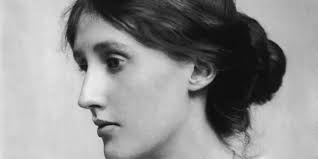 In Virginia Woolf's extended essay, A Room of One's Own, she poses the idea that a woman must have money and a room of her own if she is to write fiction. In Woolf's day this was absolutely true since women had very little they could truly call their own, including time to pursue their own interests or even be an individual separate and distinct from their spouse or children. Nowadays, things may be different.
It's true that having money or another source of income gives one the time and freedom to write. That's why so many writers have to wait until they retire from other day jobs in order to have enough time and headspace to write fiction. But having  a room of one's own might be highly overrated.  Maybe some writers are spoiled for space or just maybe the way we write and the milieu in which we need to do it have drastically changed. 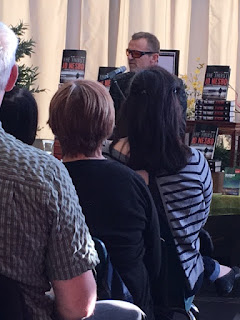 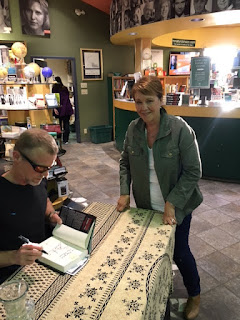 I recently went to a reading by the prolific Scandinavian noir crime writer, Jo Nesbo, who was promoting his latest novel, The Thirst. Nesbo has sold an incredible 26 million copies of his books . When asked about his favourite place to write, he confessed that even though he has an incredible office in his Oslo condo, with floor to ceiling windows that overlook the ocean - equipped with state of the art tech equipment and lighting - he finds it's the only place he can't write. Instead he frequents a small, local coffee shop. There he covertly listens in to conversations and finds inspiration for plot ideas and characters in the rush of people that come and go.
I absolutely understand. I have a nicely set up office with framed copies of all my book covers around me. It's comfortable and quiet, but I often have trouble writing there. It's just a little too claustrophobic and isolated. Eventually I have to get out among people. The odd or complex behaviours, bizarre conversations and the everyday kaleidoscope of life somehow helps me write. I remember on one particular occasion I sat next to two guys who were actually firing someone from a job. I could barely contain myself while listening to all the doublespeak, the cold, calculated logic and sickening platitudes they were laying on this poor guy. All the while I was expecting him to stand up and deck them both. It didn't happen, but I'm sure I'll find a place for this somewhere in one of my books.
So here are some famous authors and their favourite workplaces:

I was interested to see this ITV/PBS drama that brings to life the career of infamous British poisoner, Mary Ann Cotton and I have to say I have very conflicting feelings about it.
When I wrote my novel, THE SAVAGE INSTINCT, I spent months researching the life and trial of Mary Ann Cotton. I read newspaper accounts from the era and several biographies of her life. I finally made the decision that Cotton, her "career" and her trial would provide a backdrop to a fictitious story that focused more on the impact of the trial on Victorian society at the time. In particular on the life of a childless woman on the edge of sanity.
The Cotton case was sensationalized in the newspapers. The idea that a woman, and in this case, a working class woman, would actually go against all feminine ideals and murder her own children as well as her husbands and possibly her mother, caused great upheaval in an extremely patriarchal society.
This idea was completely absent in the PBS drama. While Joanne Froggatt gave a chilling performance as Cotton, she seemed too sympathetic and overly glamorized. At 2 hours 45 minutes the production seemed to hurtle through Cotton's many crimes at express speed. For viewers who have no prior knowledge of the case this proves very confusing and at times unintentionally funny. All we know is that when Mary Ann gets out the "Teapot of Death" and mixes a bit of arsenic into the tealeaves, SOMEONE'S GONNA CROAK!!

The movie offers very little in the way of an explanation of her motives or her effect on the community in which she lived. It also totally ignores the trial. Cotton didn't have any counsel to represent her at first and then when she did, he was incompetent. This was definitely a missed opportunity. Given a lot more time and a greater attention to detail, it could have been a great adaptation of an important trial.
Let me suggest the following. If you want to know more about Mary Ann Cotton, read THE SAVAGE INSTINCT instead!!
- May 22, 2017