The Pitman's Daughter: The Story That Started it All

"They put Rita's da's house into a museum"

The very first novel I wrote is set in a small mining village in North Eastern England on a street of colliery houses.  It's a love story but it's also the story of a way of life that only exists now in museums. It's a story of love, survival and ambition all told against the backdrop of the coal mines that dominated the North-East for at least two hundred years.  Thankfully now the destruction left by the mines has disappeared and nature has covered the old scars but the memories still linger.  The Pitman's Daughter is the story of Rita and you can read it very soon on Amazon.
This novel, written in 2000 has a bit of a history also.  Back in the days when a writer could contact publishers directly I had some high profile editors respond very favourably to it.  Here's a sample of what they had to say:
HarperCollins Canada: "One of the most engrossing submissions I have read since coming to Harper Collins.
"It is literary in its way but with a gloss of hardy and hearty commercialism that makes it genuinely compelling"
It was also one of the top 10 finalists for the Chapters Roberston Davies first novel in Canada award in 2001.
OK - enough of blowing my own trumpet!  Watch out for further news on this book which will be out very soon in paperback and Kindle! 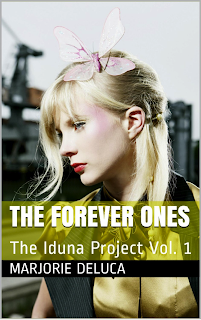 Update on THE FOREVER ONES!
The novel is now available in paperback from Amazon.
Get your copy now!
It's getting some attention from independent reviewers who will be posting reviews later this week.  There will also be a feature on Indie Author News this Saturday 27th July.
Meanwhile I'm busily at work on Volume 2 of the Iduna Project Trilogy.  Visit my Paige's World blog to find out more!
- July 22, 2013