NEW YA NOVEL OUT! 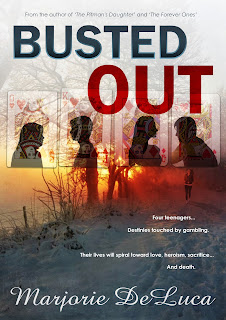 I'm so happy to give you a sneak preview of my new YA novel BUSTED OUT. It's available on Amazon Kindle today and the paperback will follow soon. Here's the blurb:


On her morning run, seventeen year old Katie discovers a frozen body lying on the snowy forest trail.  The story goes back three months to trace the events leading up to the tragedy.  Who is the victim?
Is it Mike, the import car fanatic who worships his older brother, Frankie, a hotshot graduate who’s gone East and developed big spending habits fuelled by poker winnings?
Is it Jay - the budding musician whose father wants him to be an NHL player even though he hates hockey?
Is it Kim, the math whiz and talented artist whose mother recently died and left her alone with a cold and abusive father?
Is it Nick?  Forced to be a parent to his two young sisters while his single mom goes off for days at a time and drowns herself in booze .
Gambling changes their lives until events spiral out of control and in the final showdown one of them will find love, one will be a hero, one will be the victim of a near-fatal accident and someone will die on the snowy forest track.
Set in a Canadian prairie city, this story explores the complexity of family conflict and its impact on teens who are searching for love, acceptance and identity.

This novel is important to me because it's the first one I've set in Canada.  There's an interesting history to it.
A few years back I came up with the outline of the story and it was used to write a screenplay for a student movie directed by a fantastic film maker, James McLellan who runs the Oak Park High School Film Program. With a bunch of his talented students they made a feature film called All In. Check out this trailer from their most recent film, Shuttlecock.

P.S If you've seen the movie, All In don't think you know the story! The novel has many different twists, so you'll just have to read the book!!
Click here for BUSTED OUT.